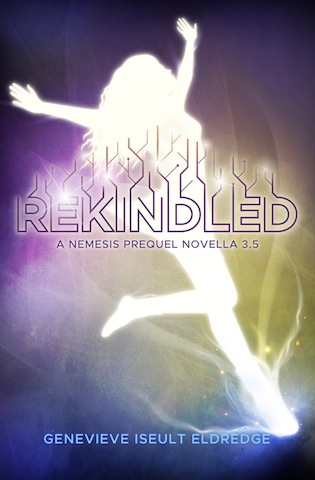 
“If you like reading about the fae, other realms and watching two bada** chicks fight then you will love this series! – The Avid Reader
It’s good to be queen. Except when it’s a total disaster.
Syl Skye, newly crowned Queen of Fair Faerie, would be psyched to be the ruler of her Summer realm, except for two things.
First, her girlfriend Rouen Rivoche became Queen of Dark Faerie, the Winter realm. That would be great except the Winter realm’s always been at war with Summer. By tradition, that makes Rouen Syl’s mortal enemy. That said, love can break past old hatred, right? Especially with a new foe about to attack them both.
Ah, no.
Which brings us to Syl’s second problem. Rouen’s under a dark spell and doesn’t remember Syl, their lives, their love. Worse, if Syl doesn’t break the spell by the next new moon, Rouen will forget her forever.
“Fast paced, full of action, never a moment of bore! Strongly recommended!” – Annarella, Goodreads
To defeat their foe, it’ll take two soul-bound queens whose hearts and minds act as one. Trouble is, no one has ever broken the dark spell Rouen suffers from.
Good thing Syl isn’t the type of queen who gives up easily.
Don’t miss Syl and Roue’s adventures in REKINDLED, the new prequel novella to NEMESIS, Book 4 of the Circuit Fae
Don’t miss out!
Perfect for readers of romance, urban fantasy, fairy stories and LGBT.

EXCEPT
CIRCUIT FAE is about two Fae queens, Syl the Summer Queen and Rouen the Winter Queen. Mortal enemies. Girlfriends. Relationship status: it’s complicated. In this scene, an enemy has Rouen captive and has cast a memory curse on her to forget Syl. Of course, Syl breaks in to save her. Here’s Rouen’s POV.

I’m Euphoria, rising goth rockstar, not to mention the Queen of Dark Faerie, mistress of Castle Knockma, and head of all the arch-Eld.
And I’m losing a game of Tag. To my mortal enemy.
Who is adorable in every sense of the word.
My heart pounds, the nighttime city skyline flashing past as I chase Syl over the towering skyscrapers in downtown LA, a glittering jungle of steel and metal rising from the asphalt far below.
A jungle that’s ours for the night.
Syl lands atop a seventy-story hotel blazing with light. She flashes me her thousand-watt smile, and the skyline dims in comparison. “Catch me if you can!”
Oh, I can.
A thrilling, predatory feeling coils in my stomach, and I get flashes of a past that feels vaguely mine—chasing Syl through the night, laughing with her, my heart on fire, training her, throwing her off a building, watching in pride as she used her fairy wind for the first time. Countless memories of me sweeping her into my arms and kissing her.
I was on top of the city, but it felt like I was on top of the world.
I want to feel that way again, want to kiss her again.
My heart urges me, Go get her, Roue. I lunge off my skyscraper and summon my fairy wind. In a burst of Winter, it sweeps me up, speeding me toward her.
The city lights spin far, far below.
She waits…till…I’m…almost…there!
My attack, a desperate attempt to tag her arm, misses again. Laughing brightly, she windwarps away from me. Whoosh! A burst of Summer wind hits me in the face, sunlit warmth prickling over my skin.
The next thing I know, she appears three buildings away, waving.
Cheeky little minx.
“You’re still It!” she calls cheerily, waving me on.
Okay, full disclosure: I hate being It. Every inch of me that’s competitive vows to get even.
To get her.
I’m drawn to her. Moth, meet flame.
My boots slam down atop a bank building. She’s a few hundred feet off, but she might as well be a world away. If I’m ever going to catch her, I’ll need to pull off this windwarping thing. Because what she doesn’t know is that I haven’t quite remembered how to use all my power.
I feel it constantly, a deep well of brooding power lying dormant inside me.
But feeling it and using it are two different things.
Good thing she doesn’t know.
“Come on!” She waves at me. “I won’t even windwarp.”
Or…she totally knows and is just humoring me.
Despite my embarrassment, a grin curves my lips. That’s my Syl. Of course, she’ll play fair, and when did I start thinking of her as my Syl?
A blush scalds my face to the tips of my pointed ears. Way to play it cool, Roue.
But Syl’s grinning with me, and my heart reaches for her.
She’s the epitome of bright and beautiful, her red curls falling soft around a face dusted with freckles. Her grey eyes are always laughing, but I feel like I’m in on the joke. She’s everything warm and Summer. Just like I’m everything Winter.
And Winter shouldn’t yearn for Summer. But I can’t get close enough to her.
My body heats up, desire shivering through my limbs. I get a running start and leap off the building. The hot night wind blows past me, the next skyscraper looming up in front of me.
It’s now or never.
With a deep breath in, I reach for my inner power. Come on, windwarp! The wind blurs as my speed hits epic levels, then with a sharp pop! Reality folds.
I vanish from my spot and reappear atop the building.
Ta-tat! I stick the landing—niiiiice—and charge after her, boots pounding the rooftop. She’s a fiery angel in the night, red hair blown by the wind. Not to mention, I get a very nice view of her cute butt in tight skinny jeans.
Hmmm...maybe losing has its merits after all.
She’s waiting for you, Roue.
It’s true. She’s flushed from our game, but she stops running. I stalk toward her, every inch of me predatory. She trembles. I see the fight-or-flight in her eyes, but she realizes it’s me, Rouen—that she knows me.
She loves me. She stays put.
My black heart almost breaks.
Almost.
“That’s your first mistake.” I lunge at her, but she dodges, leaping over me easily. She lands, and wham! Her kick slams into me, knocking me sprawling onto the rooftop. The impact rattles my teeth, but the rest of me?
The rest of me is on fire. Burning for her.
“So that’s the way it’s going to be, huh?” I grin.
She grins back. “Yup.”
It’s on.

Raised by witches and dragons in the northern wilds, GIE writes angsty urban fantasy YA romance–where girls who are mortal enemies kick butt, take names, and fall in love against all odds.

She enjoys long hikes in the woods (where better to find the fair folk?), believing in fairies (in fact, she’s clapping right now), dancing with dark elves (always wear your best shoes), being a self-rescuing princess (hello, black belt!), and writing diverse books about teenage girls finding love, romance, and their own inner power.
She might be planning high tea at the Fae Court right now.
GIE is multi-published, and in her role as an editor has helped hundreds of authors make their dream of being published a reality.