Murder by Munchausen & The Darknet by M.T. Bass Blitz and Reveal 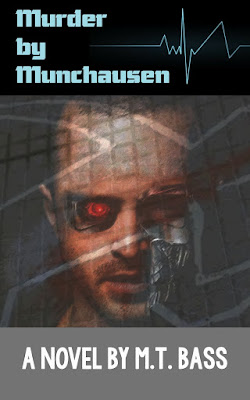 Artificial Evil has a name…Munchausen.

When androids are reprogrammed into hit men, detectives of the Artificial Crimes Unit repo the AnSub and track down the hackers. Partners Jake and EC's case of an "extra-judicial" divorce settlement takes a nasty turn with DNA from a hundred-year-old murder in Boston and a signature that harkens back to the very first serial killer ever in London.

The abandoned building in the Warehouse District was dark and cold. I didn’t have glass on the AnSub, but we were picking up an RFI signature that was an eighty percent match to the A-VIN profile. My Smith & Wesson eM&P was out and humming in my hand, ready for me to take a shot. Behind us the SWAT team was spreading out into position to monitor our visual feed from outside so they wouldn’t jam the ambient signals with their tac gear. We went passive on our glass as soon as we entered the building.

I looked over at EC, my partner, pressed against the far wall covering the left side of the industrial cavern, which was piled high with discarded junk—desks, chairs, pallets of boxed materials and strange hulking machines that no doubt once fabricated some kind of pieces-parts necessary for the stuff consumers once found they absolutely-positively could not live without in their daily drone lives—all collected from businesses that absolutely-positively no longer existed. The quiet was oppressive and haunting. We both strained for an aural clue to the location of our quarry, since the electronic intel was still too weak to pinpoint within the building.

We slowly wove around the junk, deeper and deeper into the room. I led. EC followed, constantly adjusting the ePD scanning app to search and map the room. I muted the tactical channels and stripped most of the data from my view to let him work the tech and comm. It’s too distracting. I needed to maintain focus. I needed to be able to react.

This particular Android Subject apparently went off the rails and killed a luckless pedestrian on his way to a bodega for some iced tea or bottled water to quench his thirst. A one-in-a-million occurrence, but every so often it still happens. Anyone who believes technology is infallible is a fool. The incident didn’t appear all that nefarious when first reported, but shortly thereafter the Atlas data stream went dark and patrol called our unit in. It quickly became obvious we were dealing with a malware hit, not a malfunction. The luckless pedestrian was actually not so luckless, being on what appeared to be the winning side of a particularly nasty termination suit with his ex, who we suspected had outsourced the final settlement to extra-judicial parties.

It might not make sense, but the beloved Media tags it “Murder by Munchausen.” For a price, there are hackers out there who will reprogram a synthoid to do your dirty work. The bad news: no fingerprints or DNA left at the crime scene. The good news—at least for us—is that they’re like missiles: once they hit their target, they’re usually as harmless as empty brass. The trick is to get them before they melt down their core OS data, so you can get the unit into forensics for analysis and, hopefully, an arrest.

EC’s scanner returned a hard ping. His quick double blink put his cross-hairs up on my lens and I followed his eye line to the northwest corner of the building. I swept my eyes up and down to acknowledge and we slowly headed in that direction. As we moved, the RF signal narrowed and confirmed bogey lock with a low growl in my ear buds. EC swung out from the left and unshouldered his shotgun. Good old-fashioned blast power often came in handy to buy some time. Like I said, usually they’re harmless, but usually just ain’t good enough odds for me… 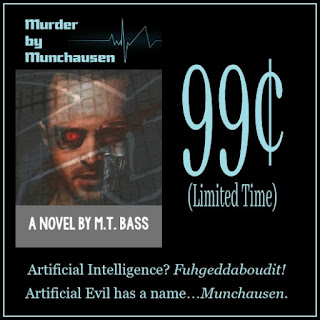 
The Darknet: The Sequel to Murder by Munchausen with a serious twist. 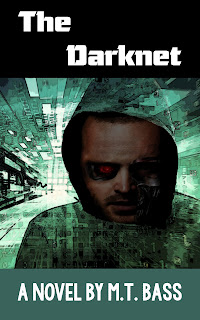 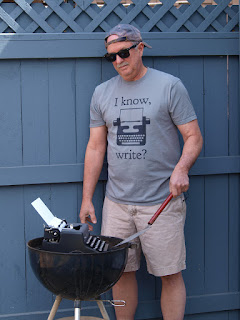 M.T. Bass is a scribbler of fiction who holds fast to the notion that while victors may get to write history, novelists get to write/right reality. He lives, writes, flies and makes music in Mudcat Falls, USA.