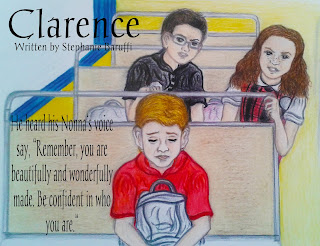 Clarence: A Story about an Italian Boy with Big Ears and Big Problems (Ages K-3)

This story reflects the feelings we all can have when we don't think we fit in. It demonstrates that with a little "reflection" we can all discover that we are beautifully and wonderfully made!
https://youtu.be/tTaY77Uaalg

Excerpt: The students headed outside to the large wooden playground. As usual, Clarence walked around the playground alone. That is until Giovanna and Vinny pushed him from behind. Clarence turned to face them when Vinny grabbed Clarence by the shoulders and pushed him again. This time, Clarence flew backward and hit his back against a wooden pole near the slide. Clarence began to get angry, but then he took a deep breath. He realized this was his chance. He was finally able to say what he wanted to say for so long.