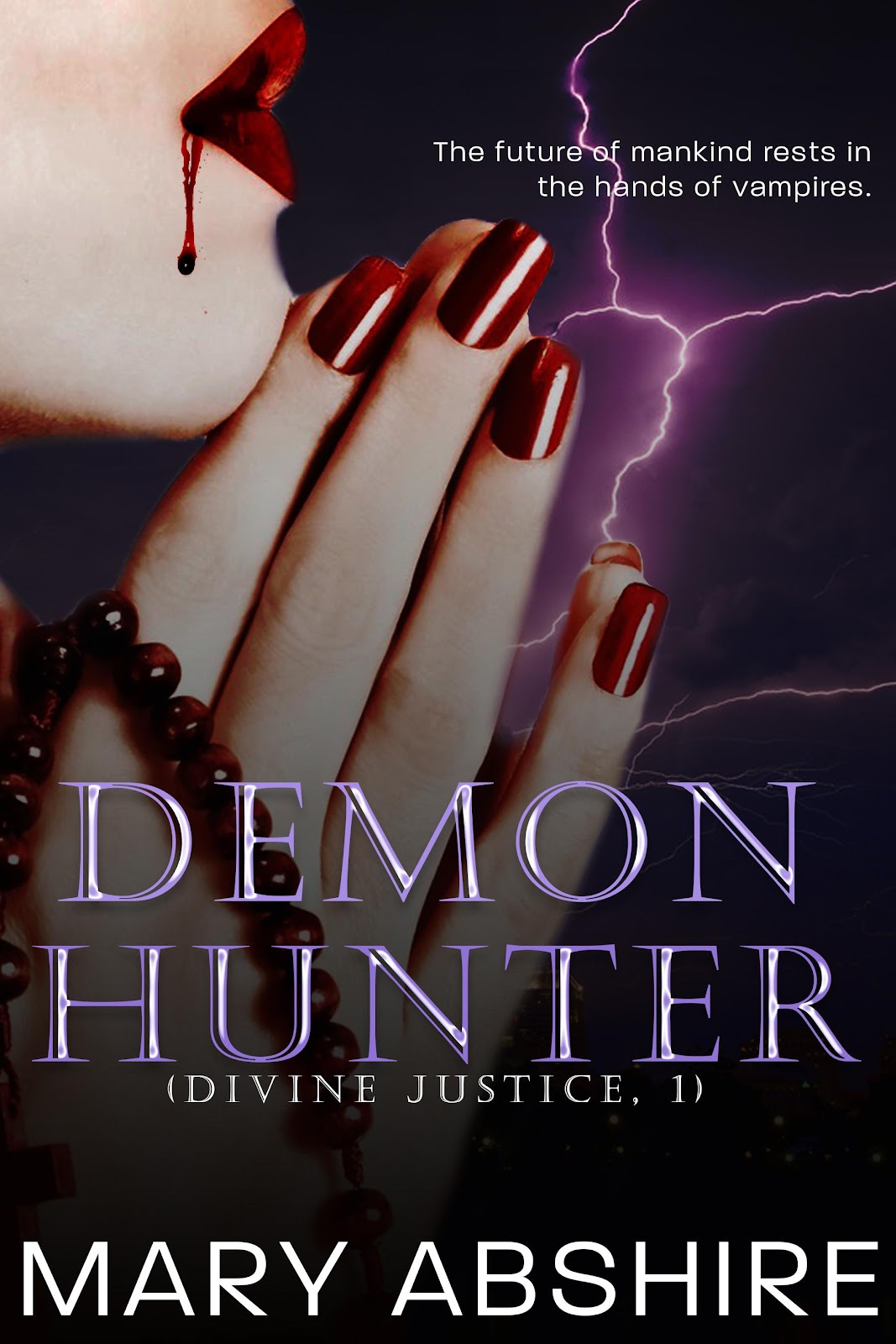 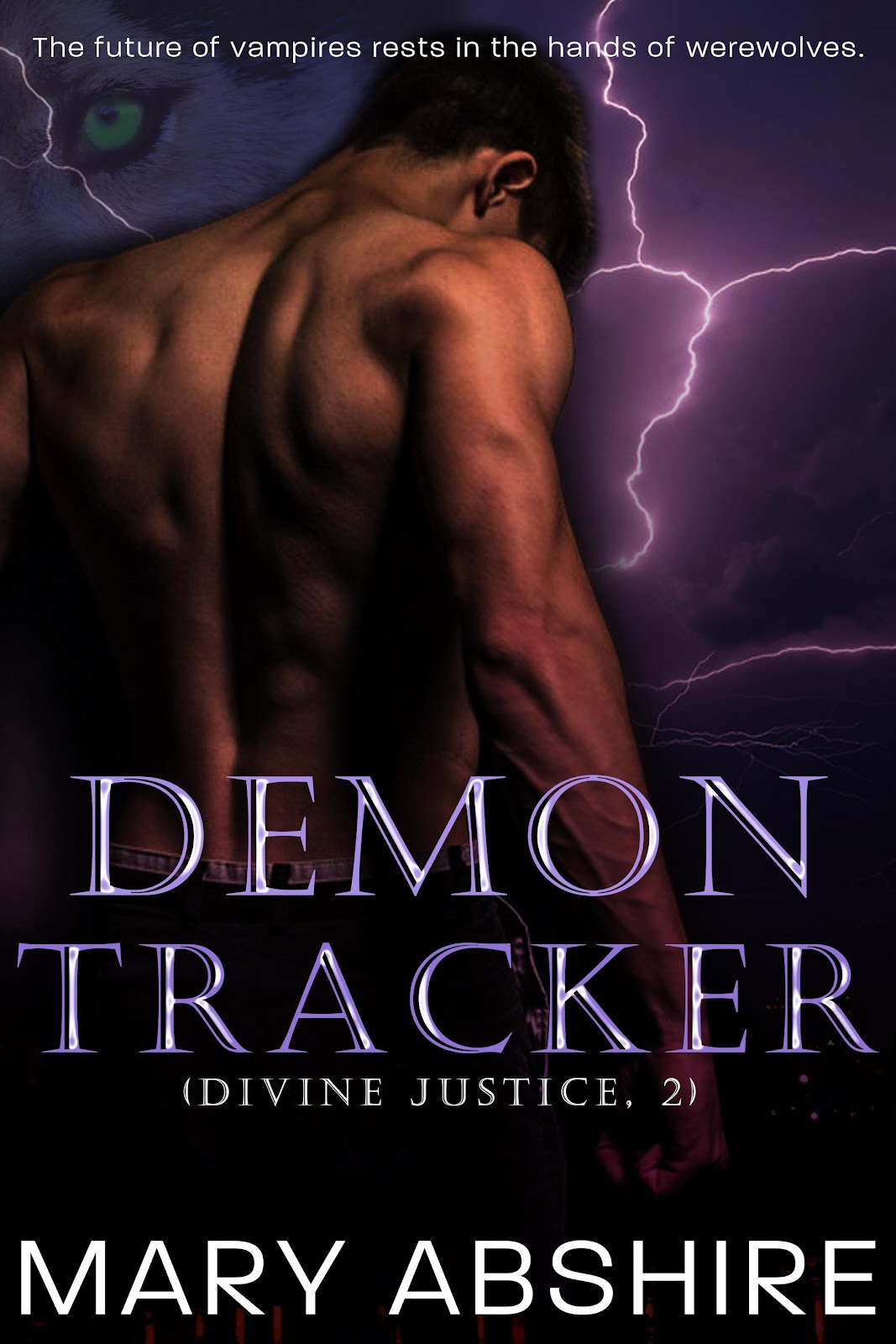 Demon Hunter:
The demon population is growing out of control and vampires are mankind’s best hope for survival.
Divine Syndicate’s top field agent, Anna, hits the streets with her partner to locate the master demon responsible for the increase in possessed humans. But finding the person won’t be easy. The city is in a state of disarray with crime, poverty, and drug use at an all-time high. While Anna and her partner search for the master, they encounter more trouble than expected. As defenders of the human race, vampires want to save lives and exorcise the demons to send them back to Hell for good. Anna fears the worst is yet to come when demons aim to destroy the best protectors for all species. She’ll stop at nothing to prevent evil from ruling on Earth.

While the Divine Syndicate is working to prevent an outbreak of demons, vampires are disappearing and turning up as corpses.
The Union of Justice is known for tracking and serving justice on vampires. With the increase in departed vamps spiraling out of control, the UoJ’s top field agent, Zale, and his partner must switch from their normal job to investigate the remains of destroyed vampires. Identifying those responsible is proving to be a big challenge. Zale needs the assistance of the vamp community, only they have their own idea of ending the bloodshed. They want to kill demons. But murdering humans, possessed or not, is against the law. Complicating matters, neither vampires nor the UoJ trust each other. Mankind’s future is dependent upon vampires and vice versa, but both are at stake as the demon population grows. Zale will do anything to save lives and end the madness, even if it means working with the one species he’s chased his entire career. 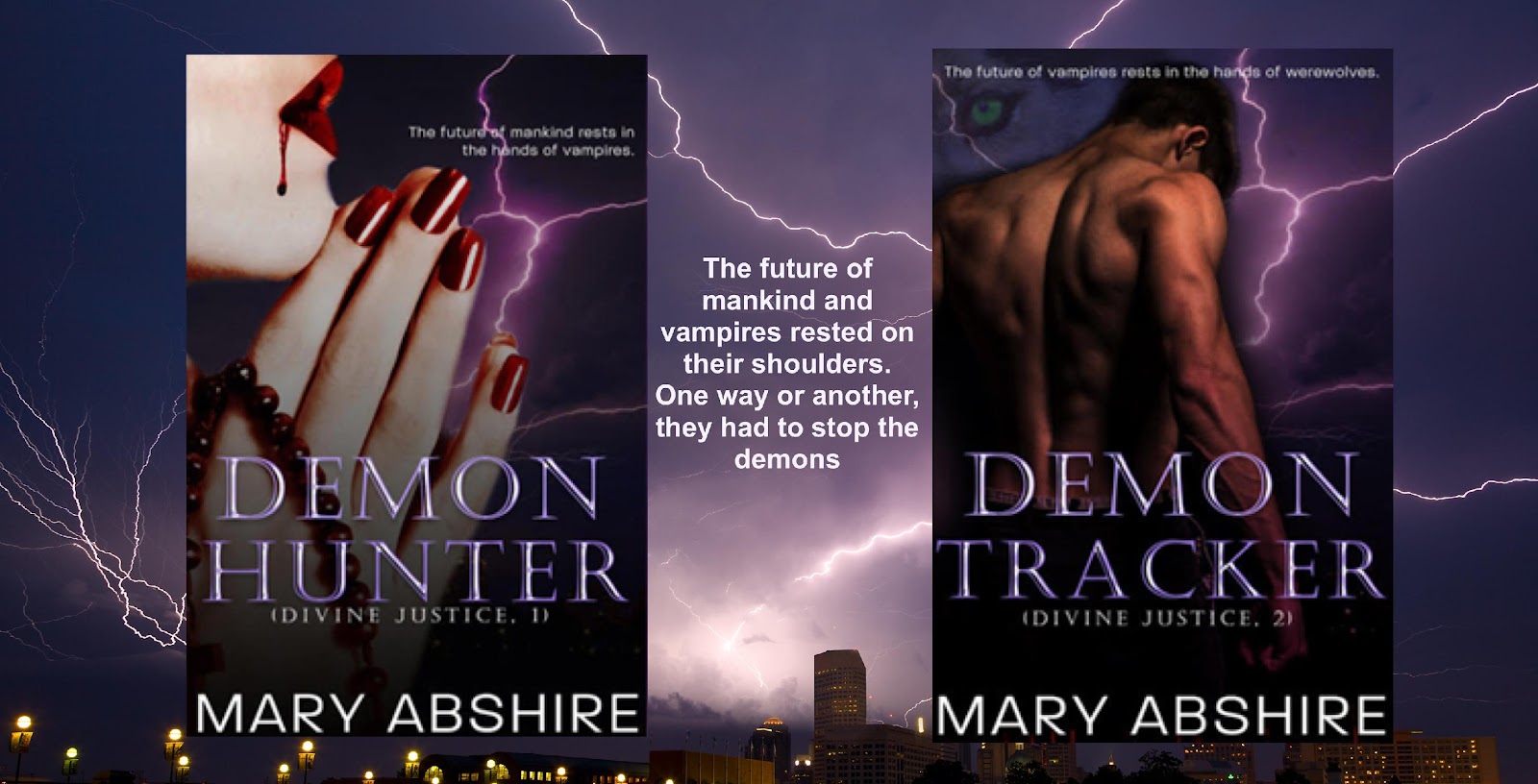 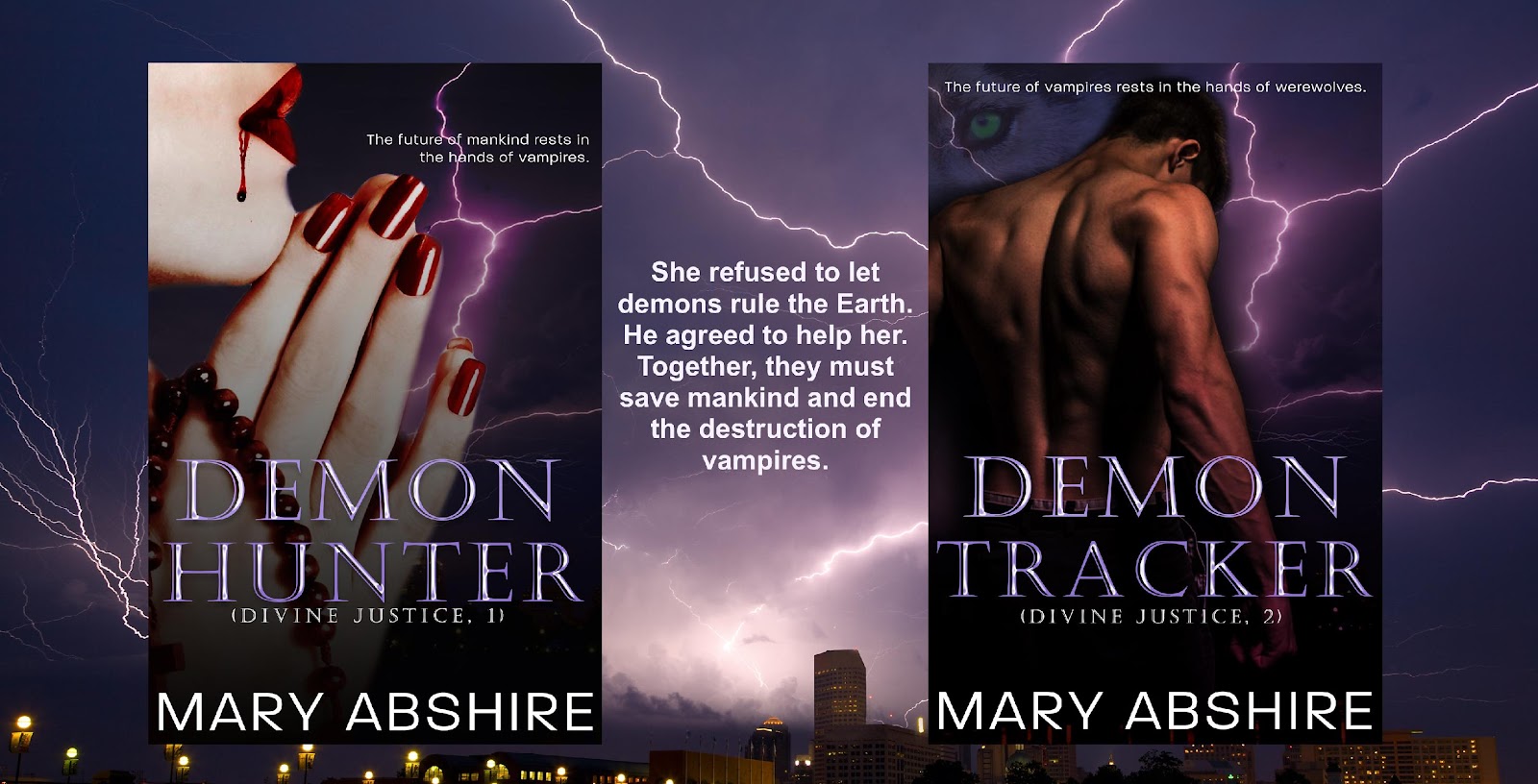 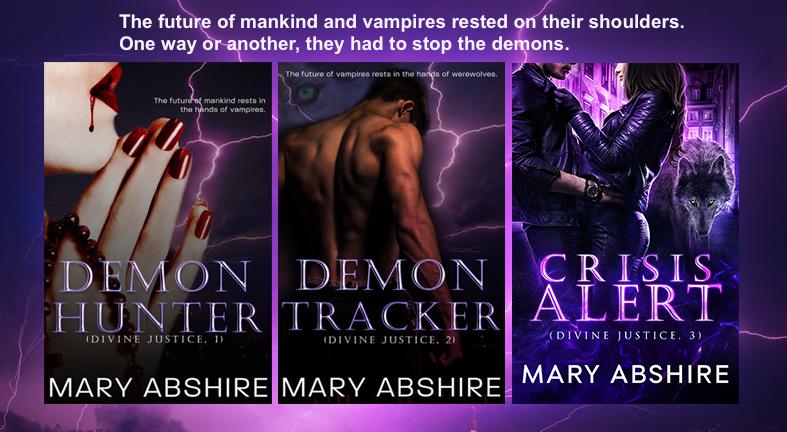 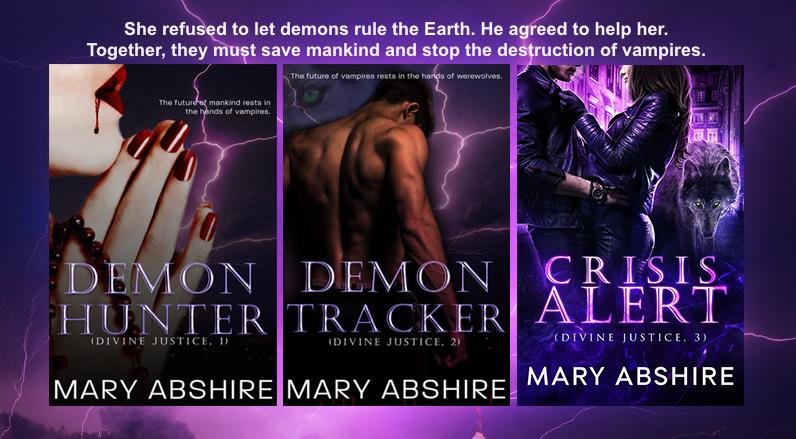 Glenn parallel parked two blocks from the club. "What's your plan?"
"I'm going to go in and find a spot at the bar. I want you to wait a minimum of five minutes before you walk in. Pretend you don't know me. I'll get a couple of drinks, show the picture, ask if anyone knew Jamal, and see what happens. And don't worry, if they ask my relationship to Tim, I'll say he was my brother and I took the photo while he was sleeping."
"So you're not going to create a scene or start a fight?"
"I will do my best to keep the situation calm. But if someone is going to try to intimidate or touch me, I'm going to defend myself."
He grinned. "Do you want me as backup?"
"Yes. Right now I don't know who is innocent and who isn't. I need another set of eyes scanning people. But if I leave, don't follow right away. Someone might be watching and I don't want us to be seen together."
"Are you carrying?"
"Have you ever known me not to?"
"No." He smirked. "I'll wait here for a while."

"The demon population has gradually increased. As a result, we've been on the streets more. We've been through phases like this over the years. But recently we caught up with a possessed human named Jamal and he committed suicide."
Victor slowed as he reached an intersection. "He killed his host?"
"Yes. And the same night, Tim broke into my home. It seems as if everything has gone haywire since the night we went after Jamal."
He turned the wheel as he followed the directions from the monitor on his dashboard. "It is strange. You know more about what is happening in the city than I do, so I will trust your instinct."
"Last night was the first time in years I'd had to deal with a group of demons. I've run into two quite a bit, but not more than that."
Victor zoomed down streets, passing in between cars closer than Anna cared to watch. She avoided looking out the window.
"I'll admit, it's strange," he said. "They come out in groups during an outbreak, but this isn't one. Yet."
"If this is the start of one, then we need to stop it soon. We need to find the damn masters."

EXCERPT from Demon Tracker:
"There are always casualties in war," Gordon said. "No one wants to kill an innocent, including vampires. I'm sure they have plenty of guilt for their actions weighing on their consciences."
"Are you sure?"
"Yes, I'm certain they don't want to take life from anyone. You should ask one sometime if you don't believe me."
"I respect your opinion. You've seen and lived through more than I have. But it's difficult to find anything good about them when I'm constantly hunting down those who have killed humans."
"Trust my words, the majority of vampires are moral and they are here to defend us from evil. If demons wipe them off the face of the Earth, we will be doomed. Demons will come for us and the rest of the non-human population. Humanity will have lost."
A world filled with evil, hate, and murder was not one Zale cared to live in. He'd seen enough death and chaos from the last outbreak and never wanted to see another.
"We can't let that happen." Zale gave a single shake of his head. "I won't let that happen."

Zale stopped in front of the desk. The screen saver for the laptop ceased changing the moment Zale touched the keyboard. The monitor showed Robert's empty email box. Zale moved the curser on the screen to select Robert's outbound messages. Following a click, a list appeared. To Zale's surprise, a message had been sent less than twenty minutes ago. Zale opened the message.
"We should head back soon," Ray said as he strode into the room. He stopped at Zale's side. "Find anything?"
Zale moved the cursor over the recipients. "Look, he sent this email to three people right before we showed up."
"Demons have kidnapped my girlfriend. She's been missing for a week. I tried to find her and get answers. Nobody is talking. I fear she is no longer here. Tell the others. The demons are coming for us. Fight back while you can. The UoJ have come for me. God speed, my friends. Fight for survival. Fight for the future." From the message on the screen, Ray met Zale's gaze.
"This does not give me a warm fuzzy feeling," Zale said.
Ray looked at the screen again. "After we get back to the office, I can research these addresses and see if we can get any hits from them. The staff who come to clean up the mess can grab his computer. We can have techies look at his hard drive."
"Do that. The last thing we need is for vampires to start fights in public places."
"Do you think they would actually go to such an extreme?"
Zale headed for the door. "Robert did. We already know vampires are being abducted and destroyed. If someone kidnapped your sister, what would you do?"
"If it was a man I'd hunt down the person and slice off his balls. If it was a woman, I'd make sure she'd pay somehow."
"Vengeance is a powerful emotion. There's no reason to think vampires wouldn't do the same."
"At least we'd get to go back to hunting them if they started killing."
Ray's comment bothered him. They needed to save lives and prevent angry vamps from hurting others. If more vampires hit the streets seeking answers for those of their kind who had gone missing, the UoJ would have their hands full.
Author Biography:

Mary is a romantic at heart and a lifetime lover of the paranormal, fantasy, and science fiction. When she's not working or binge watching television, she enjoys creating fantastical stories with vampires, demons, werewolves, angels, and/or other supernatural creatures. She often adds mystery and suspense to spice up her books. For the most part, she lives a quiet life in Indianapolis. She aspires to become a full time writer one day. She also hopes to meet a vampire, werewolf, or angel who will sweep her off her feet. Hey, a girl can dream. And Mary does.

Where to find Mary Abshire:
www.facebook.com/MaryAbshire.Author
www.goodreads.com/maryabshiretwitter.com/maryabshire
For latest news and special deals, sign up for her newsletter: https://app.mailerlite.com/webforms/landing/k0i2e8

Other books available by Mary: