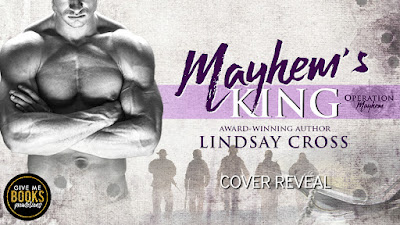 
They call him the quiet one.

But they don’t know him.

They only know him as the King of mayhem. The elite of the elite. The man his team relied on to save the unsaveable. Kingston Kenrich could save anyone…except those who he’d loved most. King thought he’d survived the worst, until his own teammate’s betrayal left him blind in one eye. Before, he lived for pain, now he lives for revenge.

Her compassion knew no bounds.

From the moment Laura Dawson’s daredevil brother, John, signed up for the Special Forces, she’d known one day she’d get the call that he’d been killed in action. But she’d never expected to be the one raising his young daughter. After a year as a stand in mother, she got an even bigger shock – John was alive. But he wasn’t the same.

When his old teammate, King, appeared in her house looking for John, Laura kept quiet. But something about the tall, dark stranger tugged at her soul.

King takes one look at Laura and feels his heart beat again. How could his betrayer’s sister evoke anything other than hate?

Fate throws them together into a turbulent world of adventure and pain. Laura fights to remain loyal to her brother while falling for the man who wants to see him dead. King is determined to make her see the twisted man her brother has become, all the while losing his heart to her more each day.

Will Laura and King choose love or loyalty? Or will fate take the decision out of their hands?

This incredibly emotional romance will take you through the highs and lows of new love, the treachery of betrayal and the uncertainty of danger in a heart pounding journey of discovery.

Lindsay Cross is the USA Today bestselling author of the Men of Mercy series. She is the fun loving mom of two beautiful daughters and one precocious Great Dane. Lindsay is happily married to the man of her dreams - a soldier and veteran. During one of her husband's deployments from home, writing became her escape and motivation.