Healing His Medic (The Protectors #1) by Nana Prah Tour 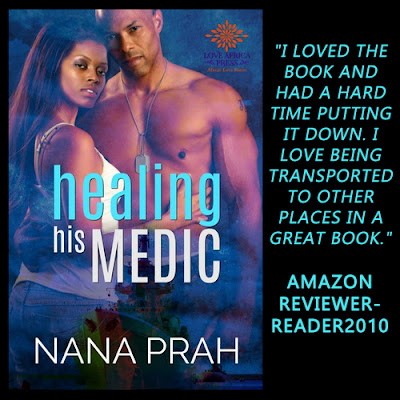 Loosening his hold, he pulled himself back to hook a finger under her chin so she could look him in the eyes. She needed to see the truth of his words.
“No, Comfort. You’re strong. You always have been and I don’t doubt you always will be. Your ex was the weak one for expecting you to heal from the heartbreak of a lifetime without changing. For not being able to remember that everything passes. Everything. And not sticking by you until it did.”
Warm air fanned his cheek when she expelled a shuddering breath. “He had every right. Hell, I’m surprised he stayed as long as he did. We hadn’t been getting along for the year prior. We were both overworked and...”
“What?” He prodded with a small shake of her shoulder.
“I had been putting off having a baby for a while.” She lowered her gaze. “I wasn’t ready to lose the foothold I’d gotten on my career. If we’d had a child he would’ve proceeded while I’d been held back. I wasn’t ready to make the sacrifice.” She focused on him again. “I guess that makes me selfish.”
Akin smiled. “Only as selfish as anyone else, male or female, who wants to make a career for themselves. It’s just that women are expected to fall back when they have a child while men continue forward.”
Her brows bunched together. “If I didn’t know better I’d think you were a feminist.”
Free from witnesses, he released the laughter. How did she have the uncanny ability to set him free? “What makes you think I’m not?”
She raised a finger into the air, “You’re mean to women.”
“I’m mean to everyone.”
“True.” A second digit flung up. ”You don’t want female sailors on your ship.”
He grabbed her hand and laced their fingers together. How could such a small thing fit so perfectly into his?
“It’s not my rule. We’re on a pirate-seeking ship where the risk of being attacked is high. Pirates have no honor. I’d hate to think what would happen to a woman if she were ever captured during a siege.”
An icy chill stole down his spine at the thought of it ever happening with Comfort on board.

UNITED INDIE BOOK BLOG REVIEW
REVIEWER: RAYHEL
RATING: 4 STARS
I enjoyed reading Healing His Medic. The characters and storyline are well written and enjoyable. I was drawn in from the beginning and had a hard time putting it down. I love Comfort’s strength and Akin’s intensity. A great read for anyone!