The Watchmaker's Doctor (Erase and Rewind #1) by G.M.T. Schuilling Tour 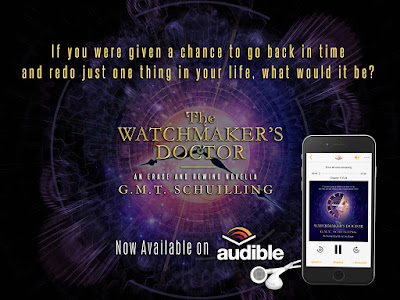 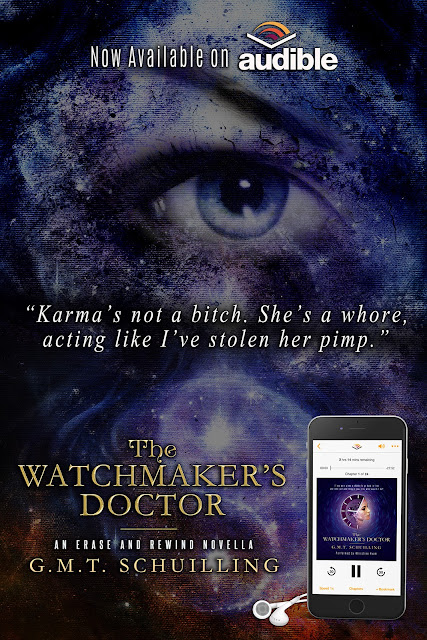 As her death replayed in her mind, her need to escape intensified exponentially. Yet she flopped next to him, unable to move a single limb.
“Ana, you’re safe now.” Greg tried to hold her by her shoulders.
Her heart was already pounding and she was on the very edge of the bench. But that tipped her over. Adrenaline surged through her veins and propelled her into action. She threw his hands off and pushed back.
He breathed deeply and waited like time itself stood still at his command. An eerie calm appeared to emanate from him. “Look at me, Ana.”
As if in a trance, she obeyed. The pond’s reflection of a sudden break in the clouds illuminated him. He appeared incandescent, his face as soft as velvet and eyes teeming with empathy.
She’d seen Greg every day for more than a year, and even confided in him. He would never hurt her. Had he saved her? Realizingthe rhythm of her heart now mimicked his, her breathing slowed, but her mind continued to reel.
“You did have an accident, but the watch I gave you turned back time.”
Anaya’s eyes hunted for the van on the road but found it deserted and the lamp post undamaged. She didn’t know how long it took her to tear her eyes from the scene and for her brain to digest the figures on the watch, but it crawled by like a millennium.
11:48.
Anaya couldn’t process anything beyond one word. How? She wasn’t sure if she said it aloud.
“I’ve spent most of my life studying time, its history and movement. I’ve made hundreds of watches for my customers, but couldn’t part with this one. As I learned more, I modified it. With every passing year, I tinkered with it. Until, at last, I found a way to rewind time…” Greg paused. “That was forty years ago. Since then, I have travelled back to that day and lived my life over and over. I’ve done all that I had to do. I decided that I wanted to pass on that chance to someone else, and you seemed like you could use it.”
She lowered her gaze to the pavement. That’s insane. But even if it were true, why choose me?
Greg must have recognized her doubt because he interjected. “I don’t think asking why is the right way to spend the little time you have left. You have a second chance at life, Ana. Choose one moment to return to and do it over. The watch rewound to the minute I gave it to you. But as its maker, I can take you back to any time in your life.”
How about the day I was born?
“I don’t know if my long years are a blessing or a curse. But I’ve seen many lives pass mine by, and I think the point is to leave this world with no regrets. The question you should be asking yourself is, what’s yours?”