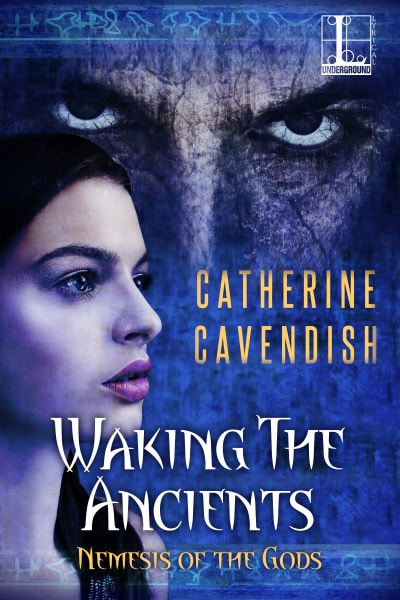 Waking the Ancients
Nemesis of the Gods #2
by Catherine Cavendish
Genre: Horror

Egypt, 1908
University student Lizzie Charters accompanies her mentor, Dr. Emeryk Quintillus, on the archeological dig to uncover Cleopatra’s tomb. Her presence is required for a ceremony conducted by the renowned professor to resurrect Cleopatra’s spirit—inside Lizzie’s body. Quintillus’s success is short-lived, as the Queen of the Nile dies soon after inhabiting her host, leaving Lizzie’s soul adrift . . .

Vienna, 2018
Paula Bancroft’s husband just leased Villa Dürnstein, an estate once owned by Dr. Quintillus. Within the mansion are several paintings and numerous volumes dedicated to Cleopatra. But the archeologist’s interest in the Egyptian empress deviated from scholarly into supernatural, infusing the very foundations of his home with his dark fanaticism. And as inexplicable manifestations rattle Paula’s senses, threatening her very sanity, she uncovers the link between the villa, Quintillus, and a woman named Lizzie Charters.

And a ritual of dark magic that will consume her soul . . . 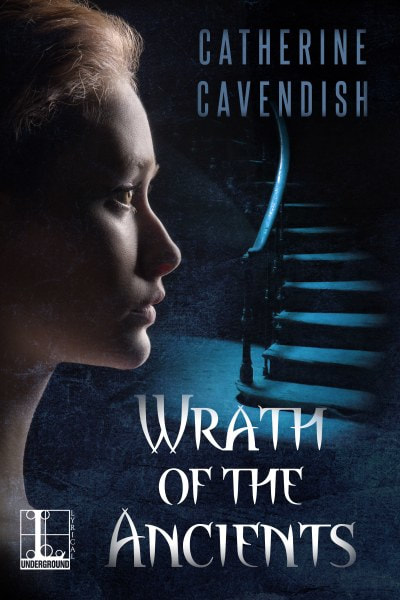 Wrath of the Ancients
Nemesis of the Gods #1

Eminent archeologist Dr. Emeryk Quintillus has unearthed the burial chamber of Cleopatra. But this tomb raider’s obsession with the Queen of the Nile has nothing to do with preserving history. Stealing sacred and priceless relics, he murders his expedition crew, and flees—escaping the quake that swallows the site beneath the desert sands . . .

Young widow Adeline Ogilvy has accepted employment at the mansion of Dr. Quintillus, transcribing the late professor’s memoirs. Within the pages of his journals, she discovers the ravings of a madman convinced he possessed the ability to reincarnate Cleopatra. Within the walls of his home, she is assailed by unexplained phenomena: strange sounds, shadowy figures, and apparitions of hieroglyphics.
Something pursued Dr. Quintillus from Egypt. Something dark, something hungry. Something tied to the fate and future of Adeline Ogilvy . . .

The Iron Staff of Vienna 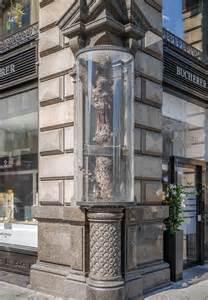 My latest novel – Waking the Ancients – is largely set in Vienna, Austria’s imperial capital and surely one of the most beautiful and enchanting cities in the world. Its streets team with culture and its proud residents are almost fiercely protective of their enigmatic, sometimes quirky, and endlessly fascinating home, where everyone from Strauss to Klimt and Freud lived and worked.
You don’t have to go far to find oddities and feel yourself smiling and musing, ‘Only in Vienna. ..’ – a familiar refrain uttered by locals and regular visitors alike. Take a walk up Vienna’s most fashionable street – Kärntnerstrasse – and you will arrive at St. Stephen’s Square (Stefansplatz) right by the magnificent cathedral. There, on the corner of Graben, you will see an extraordinary sight. A seven foot tree trunk, encased in glass and embedded with hundreds of nails, bound in iron, with a padlock. It is known as Stock im Eisen (staff in iron).
So what is it doing there and what are the nails for?
Many legends and myths surround this particular specimen. In 1703, claims were made that it was the last remaining tree from an ancient forest. Later it was said to be the last tree in a sacred grove which had formed the center of the community when the city first formed. 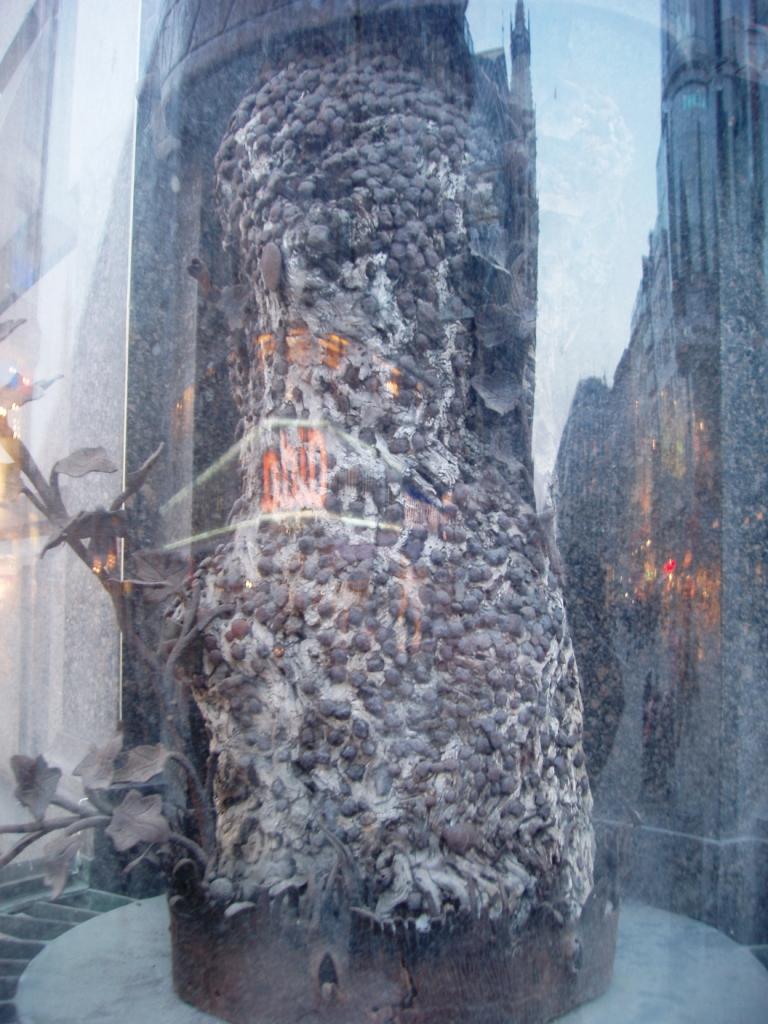 More prosaically, there is a legend that the devil himself is responsible for all the iron in the tree and guards it to this day. Or perhaps you prefer the other legend of a locksmith’s apprentice who, having stolen a valuable nail from his employer, took lessons from the devil on how to make an impenetrable lock. Here he enclosed the nail. But what about all the other nails – and they are so close together, there is barely a hair’s breadth between them.
Well, the story goes that there was a castle not far away and the finest locksmith in the area made a special impregnable lock for it. So good was his work, that not even another locksmith could dismantle it or open it. In honour of this feat of expertise, every locksmith who found work in the city had to hammer a nail into this trunk. 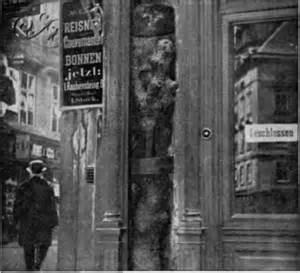 Whatever the truth of the origins of this particular tree, it is known that there was a common practice in medieval Europe to hammer iron nails into trees, wooden crosses and sometimes even rocks to ensure good fortune. Apparently, it was especially efficacious if the person was sick. They would rub the nail on the affected part of their body and then hammer it into the tree, believing the healthy wood would absorb the affliction and pain. It doesn’t seem to have particularly mattered what type of tree was used. This one is a spruce, dated at over 600 years old.
The first nails were hammered into it while it was still alive. Around forty years later, it was felled and then disappears from record for the next ninety or so years. In 1533 it reappeared, referred to by its current name. In 1548, it stood on the corner of a much smaller house than today’s host – the ornate Palais Equitable, built in 1891.
In the 18th century, the practice of hammering nails into this trunk was still thriving and this ‘iron trunk’ is the oldest surviving example of this long lost tradition which died out sometime in the 19th century. 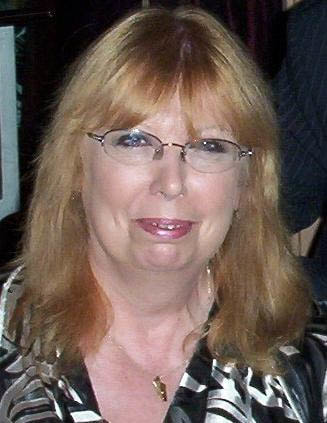 Following a varied career in sales, advertising and career guidance, Catherine Cavendish is now the full-time author of a number of paranormal, ghostly and Gothic horror novels, novellas and short stories. She was the 2013 joint winner of the Samhain Gothic Horror Anthology Competition, with Linden Manor, which was featured in the anthology What Waits in the Shadows. Cat’s novels include The Pendle Curse, Saving Grace Devine, and Dark Avenging Angel. She lives with her long-suffering husband and black (trainee) cat. They divide their time between Liverpool and a 260-year-old haunted apartment in North Wales.