Reapers of Souls and Magic by R.E. Fisher Blog Tour 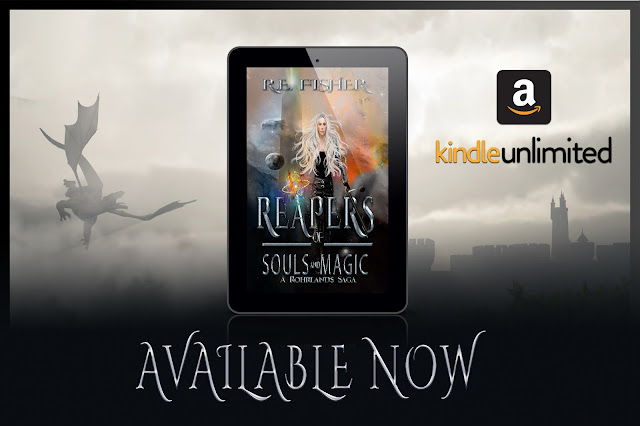 This debut novel sets up a good person and a bad person together as they work to achieve their goals. I think this is a relatively fresh concept in fantasy. Similarly, while the central plot involves a prophesy, this novel shows most of the key actors in this prophesy taking actions out of self-interest as opposed to fulfilling some kind of preordained destiny according to the prophesy. Somewhat to my surprise, it also sprinkles in elements of alternate history (although it's speculation on future Earth history rather than looking to our past) and soft science fiction. I'm not a fan of either but I rather like the speculative history parts of this book for throwing perspective on society systems in a non-intrusive way.

The fresh concept of a good 'guy' and bad guy working 'together' to achieve separate goals is the main attraction of this novel to me. In addition, I appreciate good dialogue, humour and reflections of morals and values that are elements that I've always loved in fantasy and have enjoyed in this novel.

This is a complex novel. While I think aspects to do with character interactions between Tetra and Lavalor, our main good 'guy' and bad guy respectively, can be improved upon (currently it feels a tad rushed), I recognise that the author has handled most of the complexity in switching between different perspective and plotlines and other aspects well.

I would recommend the book and I look forward to the next book.