Out of the Ashes by L.A. Casey Blog Tour 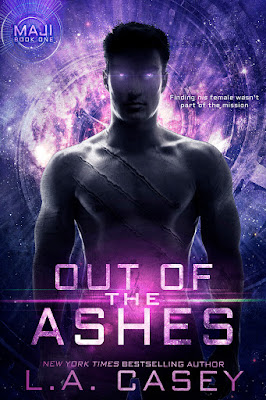 LA Casey brings her readers OUT OF THE ASHES — the first Sci FiRomance book in a new series of sexy standalone novels. These other world alphas are looking for their perfect mates that can bring them to their knees… and human women fit their criteria perfectly.

For Nova, a twenty-three-year-old survivalist, wandering a barren wasteland was a lonely existence. But her day-to-day life was about to drastically change forever. Gone were the days when her only worries were rabid animals, augmented humans, the unforgiving scorching sun, and rogue watchmen. Now, Nova found herself faced with a new threat, and he was tall, grey, and horribly stubborn.
For Kol, a two-hundred-year-old daredevil, sailing the never-ending waves of deep space was a vast and thrilling life to lead. He had one objective on Earth—rescue as many human females as possible and return them to his home planet. It was supposed to be simple, but no one told Kol that a human female’s tongue could slice a male like a blade. His charge was short, strikingly attractive, and she talked way too much.
Nova wasn’t going to be kidnapped without putting up a fight, but Kol was more than ready to go toe to toe with her. These two species set out on a collision course that would redefine the phrase “The Big Bang” forever.

Read for FREE on Kindle Unlimited 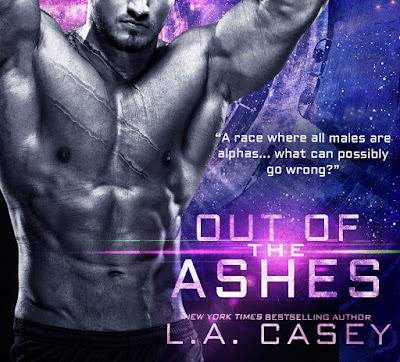 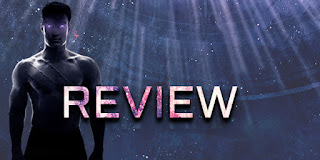 REVIEWER: RAYCHEL
RATING: 4 STARS
I had a hard time in the beginning to really get into this book. All the details seemed to be thrown at you at once and it felt a little rushes. But once all that was over with I enjoyed reading Out of the Ashes. It is a survival of the fittest sci-fi romance book. The characters and all the species are unique. I think the writing flowed nicely and look forward to hopefully more in the series.

I swayed from side to side as my pain and shock became too much for me. I focused my blurring vision dead ahead and made out six dark figures walking toward me. Six huge figures. When they stopped a few metres from me, they stared at me, and me at them. They were fully clothed in a black armour of some kind, and it only made them look that much more intimidating.
The man in the front said something in a language that didn’t sound of this planet, and without thinking, I stammered, “Wh-what?”
The man grunted and turned to his right and spoke to the person behind him in that same strange language.
“No,” the man behind replied in strained English. “We’ve practiced for weeks; you have not. You need to learn how to speak the human languages to make this mission easier, just until we fit them with translators of their own. Do what I told you to do. Repeat what your translator says through your comm, and the female will understand you like you can understand me right now. I’m not responding to you anymore unless you use this particular human language.”
With a defeated sigh, the large man turned back in my direction.
“I sa-said,” he rumbled in a bizarre accent as he switched to an extremely choppy version of English, pausing every couple of words as if he was trying to form them as he spoke. “What ‘re … you ‘oing … out … ‘ere?”
After he had spoken, he removed the mask that covered his face. The now well-lit area shone brightly on his face and revealed all I needed to know about him to be terrified. He had vibrant grey skin, dazzling violet eyes, and menacing sharp teeth with gold caps on them. That was the moment I dropped to the ground like a sack of potatoes and began tumbling into darkness.
“Why do fe-females … ‘eep ‘oing … dat ‘round me?” the Maji asked with a tired sigh.
Without missing a beat, the other voice said, “I told you that you were ugly. How many human females must faint before you until you realise that?” 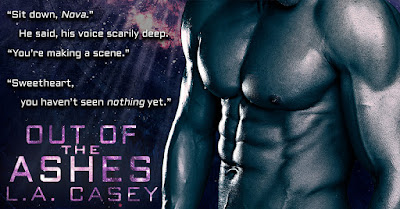 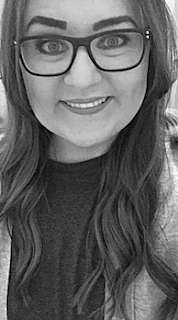