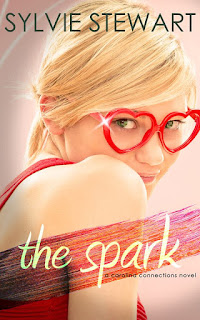 What happens when a muscle-bound manwhore crosses paths with a dynamic spitfire with an impulse problem? Just wait and see in The Spark by Sylvie Stewart.

Sylvie Stewart is an author of Romance and Romantic Comedy. Like the characters in her books, North Carolina is where Sylvie calls home these days, and she can’t get enough of the great weather and fun adventures NC offers. She and her husband love arguing over which of them is the funniest. It’s usually a tie (or so she lets him think). When she’s not writing, she can be found hanging out with her husband and kids or reading, Romance being her favorite genre, of course. And she knows that life wouldn’t be worth living without a lot of laughter, friends, and wine!

NEW STANDALONE ROMANTIC COMEDY - The Spark is the much-awaited second book in the Carolina Connections series from Sylvie Stewart. It can be read as a standalone with a HEA.
Trailer - https://youtu.be/iX87Oa8uac0
When your back is against the wall, can you change the person life’s experiences have molded you to be?Fiona Pierce is many things to many people. Dutiful daughter to her loving parents, fiercely loyal friend to her very tolerant bestie, half-assed employee to her laundry list of bosses, and dedicated fashion goddess and spreader of good cheer to the world at large. But Fiona is hiding something behind her irresistible smile – something she’s determined to keep to herself.Mark Beckett doesn’t do complicated. Saddled with lingering baggage from his childhood, Mark sails through life one girl at a time – with frequent gym breaks in between. He likes his life just how it is and doesn’t see any need to change his work-hard/play-hard attitude.When an unexpected blast from the past threatens to turn his family's life upside down, Mark finds help in the unlikeliest of places – specifically the pint-sized princess who has a knack for pushing his buttons.Can you overcome your fears and embrace the happiness you might just deserve? And, perhaps more importantly, can you really fall in love with someone who is so damn insufferable?Find out in The Spark by Sylvie Stewart.This book contains adult language and sexual content inappropriate for readers under 18.

Excerpt from: “Chapter Five – I’ll Take Hell if Purgatory Is Anything Like This”

Sitting at a small table in the corner was a tiny shift of a girl I’d encountered once before.
The encounter had not gone well.
I’d tried to hit on her and she’d not only rebuffed me, but she’d insulted me repeatedly and without reason. It was just my luck to run into Fiona Pierce on what happened to be one of the shittiest mornings I’d had in a long while.
Unable to cease being a member of the male species, I looked her over and despite her diminutive size and overall insulting tone, I still found her to be physically appealing. What can I say? I own a penis.
She has delicate features but huge green eyes and light blond hair that falls around her shoulders and sweeps over her forehead. It’s almost as if an ever-present breeze accompanies her wherever she goes, causing her hair to float around her face in constant motion. There was just…something about her, some hint of fire I’d noticed the very first time I’d spotted her across Laney’s backyard. It was the very thing that had propelled me toward the deck where she’d been standing, where I’d then proceeded to bomb in a most spectacular fashion. That had been the day after Thanksgiving and I hadn’t seen her in the months since.
Until today of all days.
You can stay up to date on all things related to Sylvie Stewart and her Romantic Comedy series here: The Spark
Website: www.sylviestewartauthor.com
Facebook Author Page - www.facebook.com/SylvieStewartAuthor
Twitter - www.twitter.com/sylvie_stewart_
Instagram - www.instagram.com/sylvie.stewart.romance
Amazon Author Page - www.amazon.com/-/e/B01ESDMZY8
Goodreads Author Page - www.goodreads.com/author/show/15303783.Sylvie_Stewart
Mailing List Sign Up - http://eepurl.com/cnbsMn
Review Team Sign Up - http://bit.ly/2fIuOV6