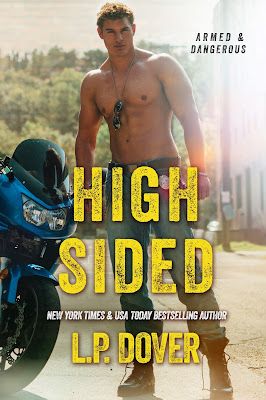 Wild, reckless, and fast.
That’s how I raced until a fatal accident on the track ruined my riding career. I had no choice but to leave that life behind; at least, until now. My name is Logan Chandler, one of the best FBI agents in the country. When an old friend calls for help and winds up dead, I take matters into my own hands. In order to do that, I have to go back to my past, back to the racetrack and to the one girl I never thought I’d see again . . . Kassidy Bennett.
She’s the key to solving it all, but bringing her in could put her in grave danger. Unfortunately, I didn’t realize she was already there. To save her, I have to put everything on the line. It’s a race against time, a race to the death, and only one will make it to the end.
** High-Sided is a Standalone Novel in the Armed & Dangerous Series** 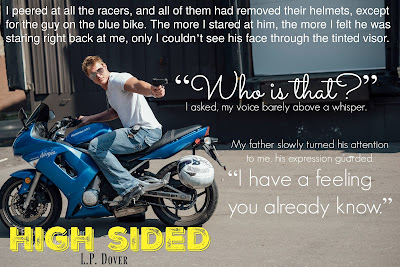 “Kassidy, I know you’re in there. Please open the door.” There was a sheer curtain over the glass panes and if I moved across the room he’d see me. All I could hear was the thumping of my heart. “Kassidy, please. I need to talk to you. I’m not leaving until I do. You know I won’t.”
“Shit,” I hissed low. He was right. If anyone had the patience to sit around for hours, it was him. He’d done the same thing to me years ago when I told him I wouldn’t go on a date with him. He stayed on my porch for hours and slept on the swing. At the time, I loved his persistence. I wanted to go on a date with him, but I was curious to see how far he’d go.
Knowing he wouldn’t leave unless I made him, I thrust the door open, embracing the anger I felt welling in my chest. I needed it to get rid of him. Logan stepped back and I held my breath, taking in the desperate look in his eyes. For a second, I could feel my resolve slip, but then I remembered the hurtful words he said to me in the hospital.
“There’s nothing to say, Logan. If you want to say you’re sorry, then say the words and get the hell out of here. Other than that, I have no desire to see or talk to you.”
He looked straight into my eyes. “Saying I’m sorry doesn’t even begin to cover it, but I am. I am so fucking sorry for what I did.”
“Great, you said it. We’re done here. Goodbye Logan.” I slammed the door on him and locked it.
“Dammit, Kassie.”
“Don’t call me that!” I shouted, slamming my hand against the door.
He moved closer to the door and I stepped back. “I know you’re pissed at me, but I need you to hear me out. I’ll stay out here the whole night if I have to.”
“Not if I call the police.”
“They’re not gonna be able to do anything to me. At least, not before I get in there myself.” The doorknob wiggled and I gasped.
“What are you doing? You can’t come in here,” I growled.
“Yes, I can, and I will. If it’s the only way to make you listen I don’t care what I have to do.” He fumbled with the doorknob again and I choked, stumbling back into one of my bar stools. I had no doubt he could get in my house, but I wasn’t going to be in it when he did. Grabbing my phone, I jammed it into my back pocket and raced to my bedroom, locking the door behind me. I had to get out of there fast.
I changed into a pair of jeans and fetched my black leather jacket out of my closet so I could put it on. My motorcycle and helmet were in my garage but all I had to do was climb out my window to get to them. “Kassie!” Logan called out. The front door slammed shut and I sucked in a breath; it was time.
Opening my window, I carefully slipped out. Logan knocked on my bedroom door and tried my handle. “Kassidy, please come out. I don’t want to do this.”
As soon as I was out the window, I raced to my garage. Slamming my helmet on my head, I jumped on my bike and turned the key. The engine roared to life as I revved it and I sped out of the garage as fast as I could. Logan had no idea I could ride, but I wished I could see the look on his face when he saw me. All I knew was that I had to get away from him, and fast.
Once out of the driveway, I took a left turn, clearly realizing the lapse in judgment. It was the road I’d avoided ever since Levi died on it. “Dammit,” I cried. My eyes started to water and there was no way I could wipe the tears away with my helmet on and going down the road. The sound of Logan’s bike drew close behind and I panicked. What was I going to do?
He gained up to me, clearly not stopping unless I did. More tears fell down my cheeks; especially when I arrived at the spot where Levi was ran off the road. I pulled over and shut off my bike, ripping off my jacket so I could breathe. Logan parked beside me, but I jumped off my bike and walked away from him to the dented guardrail. I took off my helmet and stared at the rubber markings on the metal. My fingers traced the tire marks and I broke down, falling to my knees. My heart felt as if it’d been ripped out my chest.
Logan’s hands closed over my shoulders, but I smacked them away. “Don’t touch me.”
His touch left my body, but I could feel his warmth as he sat beside. “I didn’t know you could ride.”
“Levi and Sean taught me after you left. It helped get my mind off of things.” I tried not to look down in the ravine where Levi was found, but I couldn’t help it. The amount of pain he must’ve felt had to be excruciating. I slammed my hand against the guardrail and sobbed.
“I’m gonna miss him too, Kassidy. Levi was a good friend.”
Angrily, I wiped my tears away and scoffed. “How would you know? You left eight years ago and never looked back.” 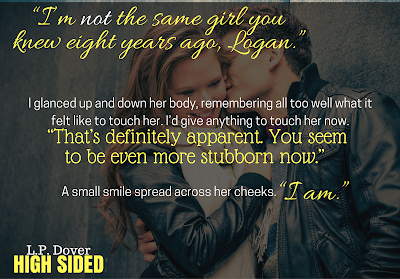 New York Times and USA Today Bestselling author, L.P. Dover, is a southern belle residing in North Carolina along with her husband and two beautiful girls. Before she even began her literary journey she worked in Periodontics enjoying the wonderment of dental surgeries.
Not only does she love to write, but she loves to play tennis, go on mountain hikes, white water rafting, and you can’t forget the passion for singing. Her two number one fans expect a concert each and every night before bedtime and those songs usually consist of Christmas carols.
Aside from being a wife and mother, L.P. Dover has written over twenty novels including her Forever Fae series, the Second Chances series, the Gloves Off series, the Armed & Dangerous series, the Royal Shifters series, and her standalone novel, Love, Lies, and Deception. Her favorite genre to read is romantic suspense and she also loves writing it. However, if she had to choose a setting to live in it would have to be with her faeries in the Land of the Fae.
L.P. Dover is represented by Marisa Corvisiero of Corvisiero Literary Agency.
Facebook | Website | Twitter | Goodreads | Amazon | Pinterest | Google+ | Email
Sign up for L.P. Dover’s Newsletter