Till I Kissed you by Laura Trentham Review Tour

It’s summertime in Cottonbloom, where two lovers find themselves at a crossroads just as things start to heat up. . .
Regan Lovell grew up on the wealthy Mississippi side of Cottonbloom—and now, as mayor, she’s determined to save it from the fate of so many small towns. Part of her plan to help the local economy is the Labor Day tomato festival. If only she wasn’t being undermined by Sawyer Fournette, who’s planning a crayfish-themed celebration on the Louisiana side of the river on the very same weekend. The pranks and sabotage are getting out of hand, and she’s had it with him—no matter how much she enjoyed those stolen hours in his truck bed, so many years ago…
Sawyer knows that Regan's never forgiven him for breaking her heart—but despite his reputation as a low-class swamp rat, he’d never hurt the woman who still secretly drives him crazy with desire. Someone in Cottonbloom has it out for her, though, and Sawyer intends to watch her back…and the rest of her too, if she can ever let go of her distrust. But will a common enemy be enough to unite them—and finally fulfill the promises they made one passionate night under the stars? 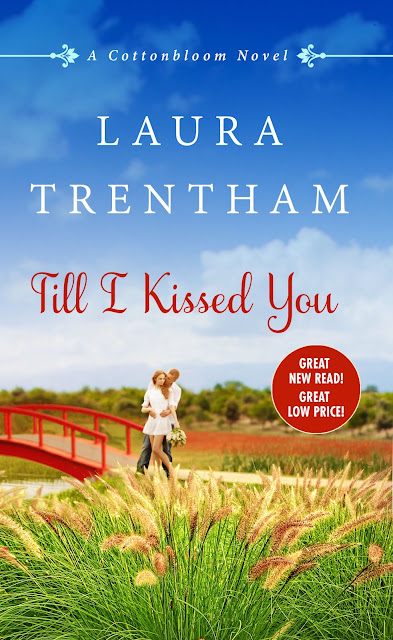 “Laura Trentham’s romances are like the icing on the cake, the extra scoop of chocolate ice cream or a perfect summer day…” - Tome Tender Book Blog

“I am really sad that this series is over as I have fallen in love with Cottonbloom. I can't wait to see what Laura Trentham writes next!” - Love’s A State of Mind
“Till I Kissed You is full of spark and snark. There is heat and tension, with a bit of a whodunnit thrown in there for good measure.” - BJ’s Book Blog

“Are you going to pretend last night never happened?” Sawyer asked. Regan took a quick breath and matched what sounded like hurt feelings with equal amounts of defensiveness. “You were the one pretending.” He took a step closer. She held her ground even though one of her feet slid backward on the dirt floor. “It’s almost like it was a dream, isn’t it?” At least he hadn’t said “nightmare.” She rubbed her lips together. He took another step. The heat of his body and fresh scent enveloped her. He’d showered recently. Maybe he’d worked late. Maybe his hair was still damp. Maybe the stubble from the night before was growing into a beard. “It was dark and secluded and we were kind of forced into one another. It had nothing to do with you and me. Just like the night of the rabbits. It was the situation, right?” Why had she asked instead of stated? And why had she mentioned the night he had pressed her into the sweet-smelling grass and left her a puddle of lustful confusion? “Exactly. It’s dark and secluded now too.” Another step and his chest grazed hers. She lifted her face toward his, every nerve ending straining for him. “It is that. And we’re close.” “How do we keep managing to get ourselves into these dark and secluded situations?” He circled her nape with his hand. It was all the encouragement her body needed. She pitched into him, her arms rising to circle his shoulders. Her fingers wound in his damp hair, the faint scent of his shampoo niggling at her memories. It was the same one he’d always used even though he could probably afford a salon brand. Solid, practical, sexy Sawyer. His lips coasted from her temple to her jaw, laying small kisses along the way. She arched against him, turning her head in search of his mouth. Finally, he kissed her. A stuttering sigh escaped her on contact. His one hand tightened on her nape while the other coasted down to cup and knead her backside. She whimpered, the noise coming unbidden from her throat. His tongue made gentle forays inside of her mouth, twining with hers. She sucked his bottom lip into her mouth and nipped it. He pulled back with a growly sound that veered humorous. “You missed this haven’t you, baby? I’ll bet none of those Mississippi boys made you feel like this.” His words were a dunk in the ice-cold waters of reality. She had spent too long getting him out of her system to regress over one short summer. Pushing off his chest drove her pelvis into his, and she nearly succumbed to temptation. His hard length pressed into her. The truth was she had missed him. Terribly. Not only physically, but the emotional connection that sparked so readily between them. She twisted against him and he let her go, leaving her stumbling backward two steps before she caught her balance. Her lips felt swollen and tender and craved more. “This is crazy.” 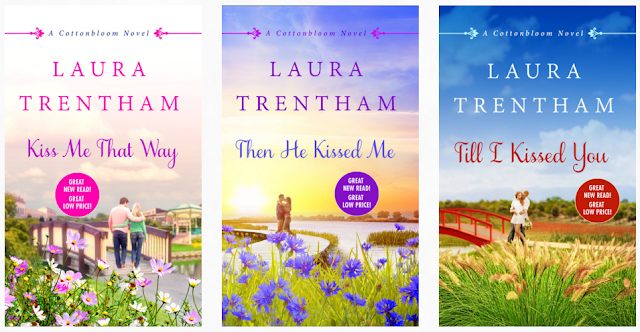 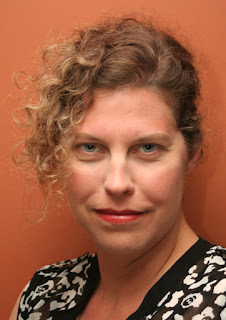 An award-winning author, Laura Trentham was born and raised in a small town in Tennessee. Although, she loved English and reading in high school, she was convinced an English degree equated to starvation. She chose the next most logical major—Chemical Engineering—and worked in a hard hat and steel toed boots for several years.
She writes sexy, small town contemporaries and smoking hot Regency historicals. The first two books of her Falcon Football series were named Top Picks by RT Book Reviews magazine. When not lost in a cozy Southern town or Regency England, she's shuttling kids to soccer, helping with homework, and avoiding the Mt. Everest-sized pile of laundry that is almost as large as the to-be-read pile of books on her nightstand.

Cotton bloom is a place I'd love to live in. The town and it's folk and those across the river will get under your skin and crawl into your heart .

Reagan and Swayed were Hugh school sweethearts .  Sadly though their romance went bottoms up no thanks to her mamma . See Reagan's mamma felt Swayed wasn't good enough ,from the wrong side of the river and all....well mamma you're in for surprise !

Reagan grows up to become Mayor of Cottonbloom and she's desperate to save her little town ny hosting a festival in hopes if winning a competition but so is Sawyer , from the other side of the river . So that's how their paths meet up again ....

This book was Heart of Dixie meets up with Miss Marples.  Everything about it hit my #happyreadingspot# in my brain . From the setting to the dash of mystery to steamy live being rekindled

A read I'd recommend for the front porch armed with beverage in hand .