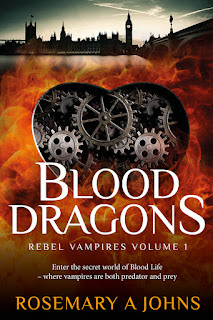 A hidden paranormal London lies beneath our own. Escape into the supernatural world of the Blood Lifers – where vampires are both predator and prey.

1960s London. Light is a rebel Rocker Blood Lifer with a photographic memory. And a Triton motorbike. Since Victorian times he’s hidden in the shadows. Both predator and prey. His venom is deadly. He feeds on blood. Human, of course. But when he discovers his ruthless family’s horrifying secret experiments, he questions whether he should be slaying or saving the humans he’s always feared.

Ruby is a sexy but savage Elizabethan Blood Lifer. She burns with a destructive love for Light. But he’s keeping something from her. Something that breaks every rule in Blood Life. When she discovers the truth, things take a terrifying turn.

Kathy is a seductive singer. But she’s also human. Light knows his passionate love for her is reckless but he’s enchanted. Yet such a romance is forbidden. When the two worlds collide, it could mean the end. For both species.

What dark revelations will Light reveal at the heart of the experiments? Will he be able to stop them in time? The consequences of failure are unimaginable. Unless Light plays the part of hero, he risks losing everything. Including the two women he loves.
A rebel, a red-haired devil and a Moon Girl battle to save the world – or tear it apart.

Get ready to dive into Blood Life...

ROSEMARY A JOHNS is a traditionally published author of short stories under the name R. A. Johns. Blood Dragons is Rosemary A Johns’ debut novel.

Rosemary A Johns wrote her first fantasy novel at the age of ten, when she discovered the weird worlds inside her head were more exciting than double swimming. Since then she’s studied history at Oxford University, run a theatre company (her critically acclaimed plays have been described as "uncomfortable, unsettling and uneasily true to life"), and worked with disability charities.

When Rosemary’s not falling in love with the rebels fighting their way onto the page, she heads the Oxford writing group Dreaming Spires.

Rosemary A Johns is a Goodreads Author and can be contacted at rosemary.johns1@btinternet.com

To sign up to Rosemary A Johns’ VIP Email Newsletter with news of hot releases, promotions and the free short story “All the Tin Soldiers”, click here: http://eepurl.com/bQ0kMX

UNITED INDIE BOOK BLOG REVIEW
REVIEWER: JO
RATING: 4 STARS
Rebel Vampires 1:  Blood Dragons by Rosemary A. Johns is the memoir of Light, a good guy turned bad-boy vampire. Light tells his story, Notebook-style, to the love of his life, failing in health, he reveals all of the skeletons in his closet in hopes to reach her one last time.  Light has known the best and worst of civilization and for many a millennia felt much more comfortable creating chaos and terror with his maker until she decides it’s time to return to the vampire family she left behind.  Feeling scorned and rejected, Light finds his way back his own humanity and sets to make things right and falls in love in the process.

This was an interesting story, told from the male protagonist perspective, Light is very English and speaks with strong colloquialisms, which made the story that much more interesting to read.  Written as a biography to his love, to explain his back-story in measures to reach her, just one last time.  Despite what Light has done during his fevered years, you can’t help but root for him to have a win.

Rebel Vampires Volume 1: Blood Dragons is released 14th August: http://getbook.at/BloodDragonsKindle
Free on Kindle Unlimited.
*EXCLUSIVE LIMITED-TIME OFFER*
Special launch price $0.99 (£0.99) for ONLY five days from the 14th to the 18th August. So grab your copy quickly. Then relax and enjoy your summer reading...

Join the Facebook Launch Event by clicking here: https://www.facebook.com/events/1248001395234420
Follow the exciting Release Day events and Blog Tour with #BloodDragons. Giveaways, reviews, interviews and features. Join in, comment, share and like. Be part of the launch and the start of the Rebel Age!

Thank you to the fantastic blog hosts - as Light would say, ‘you’ve been blinding.’

To share news of the release click here for a Readers’ Media Kit, including photos and Quotable Tweets: https://rosemaryajohns.com/readers-media-kit

Enjoy the events. I look forward to seeing you there!

Thanks to all the hosts, reviewers, interviewers, readers and bloggers, who have supported me over the release – you are all Rebel Stars!