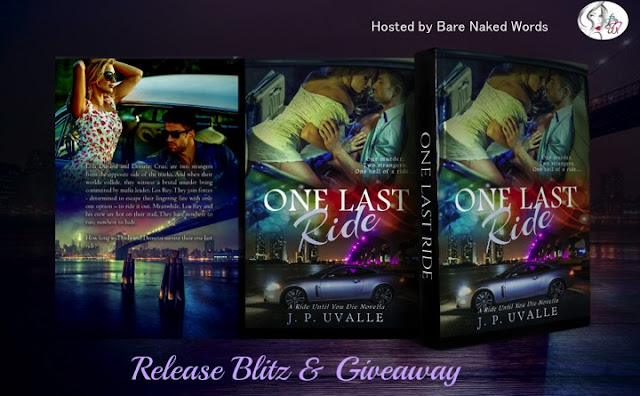 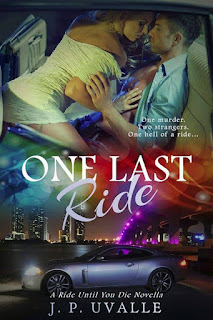 One Murder. Two Strangers. One Hell of a Ride... Lola Durand and Demetri Cruz, are two strangers from the opposite side of the tracks. And when their worlds collide, they witness a brutal murder being committed by mafia leader, Los Rey. They join forces—determined to escape their lingering fate, leaving them with only one other option - to ride it out. Meanwhile, Los Rey and his crew are hot on their trail. They have nowhere to run; nowhere to hide. How long will Lola and Demetri survive their one last ride? 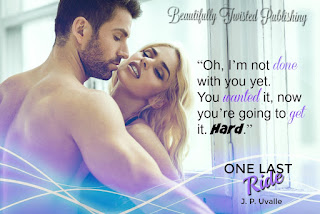 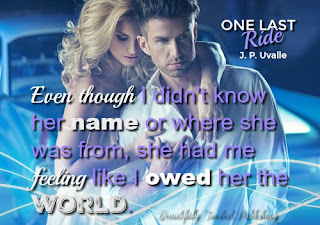 Excerpt
I placed my hands on my hips, tugging slightly on my bottom lip. “Need any help with the car?”
He stared at me a moment and furrowed his eyebrows together. He seemed to be thinking real hard as if I’d asked him a physics question or something. He cleared his throat. “Umm…no. I’m good. I’m particular about how I like my cars washed.”
I cocked my head at him. “Anal much.”
He started cracking up. “I had no idea you were into ass-play.”
I rolled my eyes and pushed him in the chest as I walked past him. “Whatever, get your mind out of the gutter.” He continued to laugh as I went to sit on the sidewalk in front of the car. “You’re not particular about how people watch you wash your car, are you?”
He gave me a half smirk. “Matter of fact, I am.” He strolled over, and bent down in front of me; his lip still curled up. “You see…” He went about adjusting my arms as if he were a photographer, prepping his model for a photo shoot. “You need to have your shoulders back like this with your chest poked out.”
I rolled my head back, letting my hair fall down my back and pushed my chest out. “Like this?” My question was loaded with innuendo.
“Yes. Perfect. Now, what to do with these legs. Hmm…” He brought his hand to his chin to think. “Ah…yes. I think having them open like this would be best. His hands slowly traveled up my legs to my knees, pulling them apart. Him touching me ever so gently had my body tingling all over. I closed my eyes and took a deep breath, feeling the surge flow heavily through my veins. But the sensation quickly died when he no longer had his hands on me. Opening my eyes, I frowned. He was at the hood of the car, working his arm in a circle to create a lather of soap.
I blew out a breath, continuing to watch Cruz work his way around the car. He was careful not to miss a single spot. His muscles bulged with every stroke. His skin glistened under the sun from water and sweat. I’d never wanted to lick a person so badly. It was pure torture. But, hearing Ariana Grande’s song “Sometimes” playing over the stereo momentarily distracted me from the torture I was forced to endure. And as I started to hum along with the lyrics, an idea popped into my head. When he had his back turned to me, I got up to turn up the volume, just enough to where he wouldn’t notice the change. I smirked as I slowly walked back over to him, swaying my hips, carefully placing one foot in front of the other. I began to hum louder, the closer I got, then I started softly singing along with the words as I gently swiped my finger across the back of his neck to get him to turn around.
His eyes grew wide. “What you up to, Blondie?”
I ignored him, took the sponge out of his hand and seductively squeezed some soap on to my chest, while I rotated my hips in time with the beat. His eyes followed the stream of soap as it made its way down in between my tits.
Yeah, I got you now. Two can play this game, but I always play it better.
He licked his lips, eyes hazy with desire. Soon after, I noticed he was breathing harder. So, I continued to lather myself with soap – singing, and dancing. Walking forward I bumped him with my hip to move him out of the way, to take this show of seduction to the next level – by using the car as my prop. My stage.
“Lola we really don’t have time for this.” He was barely able to get the words out. I had him falling deeper into my trance as each second passed.
I upped the ante, placing both hands on the car in front of me, I bent over and shook my ass around in a circle.
“Oh…damn.” I heard him say under his breath. And it gave me all the incentive I needed to move forward. Onto the car. I rolled my hips, licked my lips and whipped my head around, adding more soap to my body as I dipped backed onto the car. I caressed every inch of my body with the sopping sponge. I had the tent in his pants at its peak.
“Lola…please stop this.” He struggled with the words. From the pained look on his face, I could tell he was battling the urge. I wished he’d just give in. 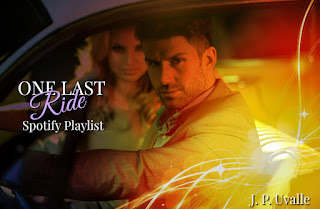 Ƹ̴Ӂ̴Ʒ J. P. Uvalle is a beautifully twisted soul who has a passion for writing paranormal romance and has the divine ability to make the unbelievable, believable. She was born and raised in Colorado Springs, went to Bel-Rea Institute of Animal Technology and graduated with an Associate's degree in Applied Science and Technology. She works part-time as an ICU technician in Highlands Ranch, Colorado at an emergency/specialty hospital.
Aside from being a technician and a writer, JP runs two businesses in her spare time ~ Beautifully Twisted Publishing and Mary Kay. On top of that, she also contributes time to the Bookwhore Addict blog, and reviews books for BookSmacked.
When She's not saving lives, coming up with her next plot twist or making women feel pretty & pampered, she's spending time with family and friends. Ƹ̴Ӂ̴Ʒ
Social Links
Facebook page
Twitter
Instagram
Amazon
Goodreads
Website 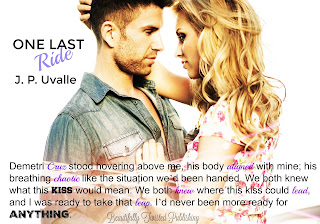 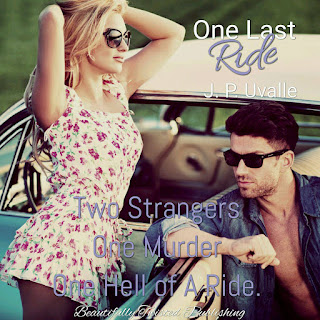 One Last Ride by J P Uvalle
My rating: 4 of 5 stars

For this only being a novella, it sure packs a punch! This book takes you on a thrill ride full of car chases and danger at every step of the way. You might also find love along the way as well. Lola, was trying to start her life but knew she couldn't escape her ex. Demetri was having issues with moving on after losing his wife. He never expected to be on a ride for his life and to get close to another woman so quickly. Lola and Demetri have serious chemistry despite what's going on. If you like thrilling car chases, bad guys who will stop at nothing to get what they want and an unexpected hero along with finding healing and moving on to finding love again then third is the book for you! This book kept me on the edge of my seat and loved it!