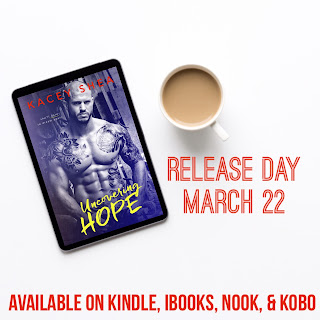 Release Day! Uncovering Hope by Kacey Shea is now available on Kindle, iBooks, Nook, & Kobo. This book is the third and final in the series but you do NOT have to read books one and two to enjoy Uncovering Hope. Also, stalk Kacey Shea on her social media as she gives away ebooks, swag, and other prizes throughout the week!

Carly Reynolds doesn’t have much faith in men. She no longer trusts her heart to lead—not after doing her so wrong. Raising her sons alone, Carly must learn to stand on her own. But she’s stronger now, wiser, and determined to move forward.

Derek Taylor, the sexy tatted drummer for Three Ugly Guys, doesn’t have much time for women, except to hook up and get off. He’d rather focus on writing music and living the career he’s always dreamed. Fate may have other plans.

Dr. Garrett Brooks is the talk of Children’s Hospital. As the new surgical resident, he is young, charming, and attractive. He takes an immediate interest in Carly but his demanding work schedule and her single mom status don’t leave much opportunity for dating.

Between love interests, two boys to raise, and a full time nursing job, Carly’s ability to stand strong is put to the test. And when strange things start to transpire Carly must face the reality that her past has come back to haunt. Can the woman she’s become dare to hope for love again? And which man will win her heart?

Uncovering Hope is the third and final book in the Uncovering Love series, but it can also be read as a standalone. Contains adult themes and explicit content and is intended for mature audiences.

Uncovering Hope by Kacey Shea
My rating: 5 of 5 stars

So I think its safe to say that I have fallen in love with these books. All the characters all I can see myself hanging out with and having the time of my life. Evie and Tate are adorable, Jon and Kate are all strong but sweet. I was hoping for great things for Carly. She's been through a lot in her life, raising two boys while working in a hospital as a nurse. I didn't know what to expect but I can say I was blown away. We find out what all went down with the ex and the boys dad. It was ugly like really ugly.. made me love her even more. Then we learn about her job even more. She's a saint for sure. It takes one special patient to turn her head to love. Derek, is part of a band that growing in popularity but he's also dealing with a lot more at home. He has so many opportunities with writing songs that he's not sure. It takes a special patient at the hospital for him to see the light. He also wants Carly... She's fighting him so hard along with another guy... before you say it, it's not what you think at all. This book has the sweet level, mixed in some moments of crying and suspense. It is the perfect way to end this series. While I'm sad to see these characters go, I have found an author that I can say I love her books. She has made me fall in love with these characters and has a way of bringing them out so you feel apart of their family. I'm so glad I read these books. It will be hard picking up a book to read after reading all three books. Oh and Derek by far, is my favorite book boyfriend of the series. This book is all about what you are willing to sacrifice for love.
Review by Amy

View all my reviews
Blitz Reviews