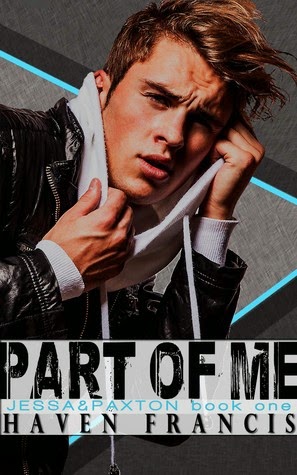 **Part of Me and Inside of You will be priced at $0.99 and all proceeds will be going to the Steph KO Cancer Fund from now until September 17th.**

Within minutes of meeting Jessa, Paxton already understood that he would not be able to let her go if he ever really let her in. Which is why he spent his year in her small Minnesota town playing nice and being her friend. Because Jessa’s future was in Chicago and Chicago was the city where every bad memory Paxton has was made. It was a city he could never return to. And he doesn't want to – he is finally free from his past and living recklessly in California with his Pops and the rest of his Venice family. But now that he has everything he has ever wanted, he can’t help but want more. And he can’t help but wonder if that more isn't Jessa.

When her first real attempt at commitment leads to a disastrous first month of college in Chicago, Jessa has reaffirmed that in a relationship she will only be one thing – in control. Which means she keeps her relationships filled with sex and void of emotion. But it also means that, in this new life where she hoped to find herself, she is absolutely alone. That is until Paxton sends his friend Violet her way. Suddenly thrust into the life that Paxton left behind and sleeping in the bed in Violet’s apartment that Paxton made so his, Jessa is finally starting to feel like herself. But she is also discovering that she never really knew the guy she considered her best friend. Who the hell is this violent, womanizing, rock god that everyone here is so reluctant to tell her about?

With Jessa firmly planted in Paxton’s past, he can’t seem to let her go. But is heading back to Chicago, the city he is being paid to stay out of, for a girl who will never want anything more than a stable sexual partner worth the risk? Maybe. Maybe he will just have to slide back into his old bed and convince Jessa that part of her is still firmly planted inside of him. Maybe he will have to show her just how well they are made for each other.

Part of Me can be read as a standalone novel or with book two in the series, Inside of You.

Due to explicit sexual content, this book is intended for mature readers.

Cover art is delicious and the dedication to her husband shows a beautiful love shared.  Paxton leaves Chicago for small town life but there are conditions set by his "mom" , my goodness what an awful woman !
Paxton's path crosses with Jessa and chemistry is instant and intense and they share a kiss of epic proportions ! Paxton pushes her away leaving her wondering  what and why !?
Paxton he's got me all hot and bothered!
Paxton opens to Jessa and bares his soul telling her the story  of his childhood and growing up , I'm howling like a werewolf at full moon , my heart just breaks !
Let's see what " Inside of You" will bring . Enjoyed  Part of You and I give it 4 Stars! 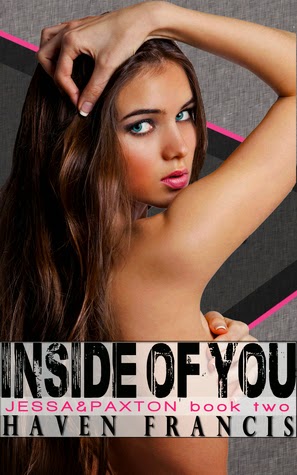 **Part of Me and Inside of You will be priced at $0.99 and all proceeds will be going to the Steph KO Cancer Fund from now until September 17th.**

Inside of You is the followup novel to Part of Me and is the final book in Jessa & Paxton's story.

With Paxton’s past in Glencoe behind him and Jessa’s walls destroyed, Jessa and Paxton are ready to start living. Determined to keep each other safe as they dive into Paxton’s former life with his band, Polly, their relationship deepens and together, they are becoming stronger.

But when a part of Paxton’s past arrives in Chicago, he and Jessa are sent on a physical and emotional journey that will test their love in ways they couldn't have ever seen coming.

Loving each other is easy, but holding onto that love is proving to be the hardest thing they have ever done.

Due to explicit sexual content and harsh language, Inside of You is intended for mature readers.

Jessa and Paxton are finally together and the band "Polly" is doing really well. Jessa copes well worth the groupies!, Paxton really loves her and is willing to give it up for her but she assures him she's fine ,nashe has his heart <3 Gabriel ( his dad) is also proud of him , they even have a record deal ! I love that he tells him , Paxton may be grown up but hearing a parent's approval means alot and let's be honest Paxton had a sad childhood !

Someone from Paxton's past comes to haunt him and I get a really bad feeling about this girl. She has a history with Paxton and she broke him but what he has with Jessa is solid and they'll survive but nit without a fight and I think Stella is going to rock the boat !

Paxton realises that Stella's been using the social networks  to her favour and its created doubt , insecurity and fear in Jessa , when he sees it for himself he understands better and can feel her pain , he's actually physically ill when reality hits home !

Jessa also has a revelation that leaves me reeling in shock and sick to the pit of my stomach. One person's selfish actions and abuse of power changed the course of another's , because of what happened we get a better understanding of why Jessa functions the way she does emotionally. "The truth shall set you free"~~This is true for Jessa , the moment  she talked about it you could feel the burden lift and her "aura" shift . My respect for Paxton moves to a whole new level , he talks Jessa through her experience and helps her come to terms with it and find herself again!

"Inside of You" ends with "Polly" doing really well for themselves, Jessa skating like a rock star and as for her and Paxton , life is just beginning!

"Inside of You" gets a five star  still  sniffling into my kleenex review !