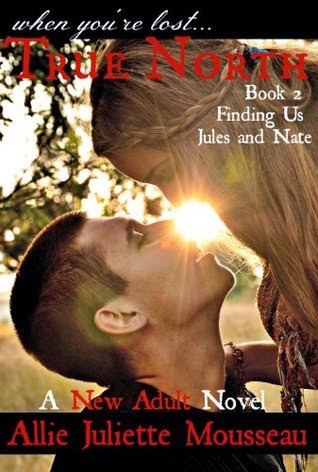 "When you're lost... True North"
The North brothers were hell on wheels-adrenaline-junky bad boys. You’d think they had a death wish – every one of them – but they didn’t really, they just got off on the thrill of pushing every limit, that gravity or any other force told them they couldn’t conquer. What they weren't prepared for were the women that would steal their hearts.

True North Book 2 Finding Us:
Nathaniel Morrisey thinks he has a handle on his affections for the one woman he’s ever cared about, Julia North, who happens to be his boss’s daughter and best friend’s little sister. But Jules is about to blow that calm self-control he's had a tight grip on all to hell.
The North brothers are wild, adrenaline-junky thrill-seekers who thrive on challenge, speed and danger. Their little sister, Jules, is a sweet, quiet, bookworm who’s been overprotected all her life by her hulking big brothers … but she is a North after all, so she has her own wild streak—a secret that none of them expected, especially not Nate!
Nate's desire to protect Jules—especially from himself and the overwhelming emotions he feels for her—have waged a war inside of him. He is plagued by painful secrets and shame because of a childhood full of abuse he knows he can never escape. How can he possibly love a woman like Julia North the way she deserves to be loved?
Julia North knows Nathaniel Morrisey is the only one for her, but with a past like a dark shadow, Nate's as turbulent as the wild horses he rides.
Will Jules be strong enough to hold on unconditionally, or will she decide it’s finally time to let go?

This story is about Nate and Jules who we first met in Finding Home. I really enjoyed getting both POV's it helps explain so many different reactions and actions by both characters. Again Allie goes into some tough issues. This time focusing on adults who dealt with abusive relationships. This time she does a great job of showing all stages all the way to beginning to heal. This truly is a story of how love can help heal anyone. Nate and Jules relationship has its sweet loving moments, moments that make you frustrated and amazing chemistry. The ending comes abruptly and I hope book 3 picks up where it ends off.